Hundreds of miles and 10-days later…The World’s First Long-Distance Paramotor Race has come to an end. Many Pilots and spectators spent the last week staring at the sky in anticipation of the next Icarus Trophy Contestant to land. One-by-one, race participants made the grueling journey from Eatonville, Washington to the BlackHawk Ranch in Valley Springs, California. Upon touching down, they were greeted with a flurry of cameras and questions. Attendees of the 2015 BlackHawk Ranch Fall Fly In were eager to hear the inside stories of what transpired throughout this unsupported, never attempted, highly anticipated Paramotor Race!

First, let’s start off by answering the big question: “So who won the Race?” The answer has an interesting story behind it, like the many other stories to come. A big congratulations to FIRST PLACE SUPPORTED PILOT Kristan Fischer and FIRST PLACE UNSUPPORTED David Wainwright! Not only did they finish the race within 4 minutes of each other, they finished the race 7 days earlier than the anticipated 10-days. This means these two gentlemen traveled nearly 1,000 miles in just 3-days with their Powered Paragliders. This once-in-a-lifetime cross-country adventure will become one of these pilot’s fondest memories. Especially for Kristan and David!

FIRST PLACE (Supported Class) – Kristan Fischer: “Kristan Fischer is a veteran adventurer. The “Energizer Bunny that just won’t say die,” he is and extreme sport and adventure pro. He’s been training for the past year and clocked about 60 hours in the air.”

FIRST PLACE (Unsupported Class) – David Wainwright: “David Wainwright is a seasoned paramotor instructor, and owner of High Adventure Paragliding. He prepared for the Icarus by teaching, including training fellow pioneer Claire Mackay. He’s been flying with about 65kilos of kit strapped to his body.”

We know an article just captures the essence of such an amazing adventure and it’s stories. That being said, we encourage you to stay tuned for The Adventurists full-length documentary – expected the early part of 2016. Check the BlackHawk and Adventurists websites regularly for updates. In the following paragraphs, we will try to summerize the highlights from each day.

NOTE: For a complete and detailed 10-day log, exclusive photos, maps, and videos, please visit The Adventurist’s website by clicking HERE, or by clicking the log book icon to the left.

Previous Paramotor Follow Cam Footage in California!
Next The Flying Car of 2015 is HERE! 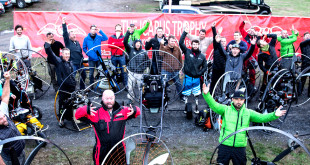 Each year, more and more Pilots make their way to BlackHawk Headquarters in Valley Springs …