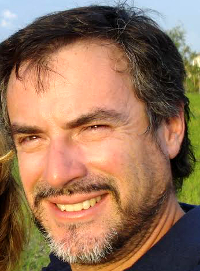 A Boy With a Dream... How it All Started:

Thank you for visiting my Powered Paragliding website. My name is Higinio Morinigo-Gill. My friends and students call me “Ike.”  I would like to share a little of my “story” with you and how personal aviation has changed my life…

After my parents divorced as a child, my mother and I moved into my grandparent’s house in downtown Asunción Paraguay. This magnificent house was designed by a famous architect and perfectly situated to overlook the historic center of the city. This stunning view included the bay, rivers, and the vast flat land that lies beyond what we call “Paraguayan Chaco.”

The house itself was very special to me. It featured 4-floors, large balconies & terraces, nautical architecture (my grandfather was a sailor), steel doors & portholes, no inner corners, and dominated by curved, fluid-spaces. Actually, the nautical architecture is so well done, that to this day no one notices that the house itself is the superstructure (bridge) of an imaginary mega yacht (by 1930’s standards). Since my grandfather was a Historian (among many other things), everything in it was old & authentic – like living in a beautiful museum.

I particularly remember going with my grandfather to the basement where many treasures were kept: vintage manuscripts from illustrious heroes, a blunderbuss from the time of the Spanish Conquest, gas masks from trenches of World War I, ancient swords, coins from the time of Jesus Christ, the ancient Greeks, and even further back in time… Military uniforms, rare books, and so much more.

My mother side family was large, so I always had family gatherings where many cousins ​​came from all parts of the world. It’s easy to imagine how much we enjoyed those meetings – running, screaming, jumping, listening to stories told by our elders, enjoying Christmas and New Years and countless birthday parties… Amid such occasions, usually in summer time, cousins of about ​​my age (whom lived in another South American country) used to come to spend a week or two. One cousin specifically, “Sandra” as I called her, was the same age as me and shared my second last name. Sandra and especially myself had a great affinity and curiosity with everything that flies. We used to have paper airplane competitions, dropping them from the highest point in the house and seeing whose would fly the longest. As time passed, we got more sophisticated by flying planes with plastic/rubber motors (usually a gift from Christmas). We spent much time recovering them from the neighbor’s roof and yard, trying to not get in trouble or be seen.

Thus, between flights and dreams, perhaps inspired by the vast blue Chaco space we had in front of us, we decided to do some design work on paper. Our goal was to build a fabulous aircraft that would transport us (pedaling) to the Paraguayans skies…. We eventually built what we would call the “GillCopter,” since our previous last name was McGill. This dream-craft came together using two bikes (one of which belonged to my younger sister, who remained terrified about us “splitting her bike in two”), a ceiling fan, two emerging (and ridiculous) folding wings, and a rudimentary rudder with my country flag proudly painted on it! Most importantly, a wicker basket under one of the “banana” seats (in vogue at the time) would contain food for our”picnics” on our trips to the Chaco. “Wow!!, How wonderful!!,” we exclaimed… “We’ve added one or two “very important” features to the design!”

On take-offs, we were pedaling with all our strength to ascend. Once we reached straight and level flight, we would take turns pedaling – counting on our “folding wings” as a back up plan in case we could go no more. We imagined ourselves flying over the city, the river, fields, and our Uncle’s house – amazing cousins and friends. Then, we realized that we were missing something crucial. I exclaimed: “No way!… Impossible to continue! We don’t have enough money to buy what we need, and if we don’t have it, we are in trouble!” What was missing? Nothing less than a radio transmitter for asking “landing permission” from the control tower of the local International Airport. What would we do now? Our whole operation risked coming to an end! Then, like everything else, we got our next great idea… Instead of a radio (which was out of our budget), we would deploy a street-crossing sized banner reading “Permission to land,” while circling the control tower. They would then send us signals with bare hands or spotlight that we were good to go.

I remember my childhood memories were centered around the dream of flight. Today, I can’t recall where our series of adventures took us next, as a whirlwind of colleges, scholarships, travels, careers, and adventures now occupy my memories. One thing I do remember was keeping my little sister (today a mother of 3) happy because we never had to split her precious bicycle in two pieces!

Life continued it’s course until a given day, about 30 years later. I was flying over the same city after taking off from nearby Chaco. With very low scattered clouds, it was a beautiful summer Sunday morning. I found myself flying just above my grandparent’s house. When I looked down, I was astonished at what I saw and how it impacted me… There was a child, standing on the house’s top terrace, staring at me. Perhaps the child was dreaming that he was flying in place of me. I found the child strangely familiar – as if I had seen him before. I smiled and waved a salute. Just then, the low cloud cover erased him from my vision. A moment later, I realized that the child was no other than myself – many years ago. I immediately became aware of what I was actually doing. FLYING! I took a moment to look at the “AirShip” I was flying… It was a Powered Paraglider with a frame and front wheel system similar to what a “flying bike” would look like. I had designed and built this “AirShip” myself. It hung from a piece of aerodynamic cloth, painted patriotically with my Country’s colors, and of course, missing a radio. THE GILLCOPTER WAS A REALITY!!! I couldn’t believe it! I was flying the same craft from my dream that took my cousin and I to flying heaven.

The old house is still there – challenging time, and now surrounded by buildings that block the view. However, that child… That child is no longer there for sure because he is here with me – looking out astonished at so many horizons seen through my own eyes.

Flying has been such a huge part of my life. It was the realization of my biggest childhood dream. Now, years later, I devote my time and life to teaching the ART of flying to others. Much of my time is spent traveling, flying in new areas, and changing the lives of “those who dare to chase the same dream I had.” As an Instructor, my greatest satisfaction is to watch a novice pilot land after their first flight. Seeing that specific smile on their face and KNOWING how amazing they feel is my greatest reward. There is an unspoken bond created between those who have seen the world from the heavens.

It amazes me the way the universe seems to mysteriously align – allowing those to reach their most desired goals… And often, we end up going much farther than we have ever dared to dream. If you are like me and have always dreamed about flying, I will be here waiting to help you realize your dream! Contact me and embark on your life’s greatest adventure!

In Argentina during the 50’s (shortly before I was born), there was a strong revival of private aviation along with a galloping “nationalism.” This led many young people to get involved as pilots.

My father, at the request of his twin brothers (who were younger – newbie pilots) traded in his sporty British 1935 MG Type A for a training plane. The aircraft was an M-62 Fairchild with low wings and fixed landing-gear.

During my childhood, I used to visit my grandparents in the summer, where somehow, I adopted my uncle’s taste for aviation. This was probably due to lots of time spent flying remote controlled airplanes and collecting any aircraft model I could get my hands on.

As time passed, I spent my teenage years dreaming of ultralight flight and belonging to urban flying clubs (which are no longer in existence). After getting married and being independent of my family, I decided to finally take pilot’s lessons as a way to relieve the stress of life / work.

After obtaining my pilot’s license, I couldn’t justify purchasing an airplane at the time. I spent time looking for more economical alternatives to follow my dream. After working with hang gliders, ultralights, and considering the restoration of an old plane, I discovered the concept of Powered Paragliding… It was love at first sight!

In 1998, after some life changes, I made the decision to start flying Paragliders. This type of sport was exotic and unknown in my country. The available equipment back then was heavy, under-powered, and the gliders were very “low performance.” With my eclectic collection of aviation knowledge over the years, I went to work designing and test-flying better designs. At that time, I also started to fly commercially for a tobacco company on the weekends. This activity would later continue in the Caribbean Basin Countries (where it was possible to fly at night without restrictions). I enjoyed flying at night the most. Unfortunately, it isn’t legal here in the USA. 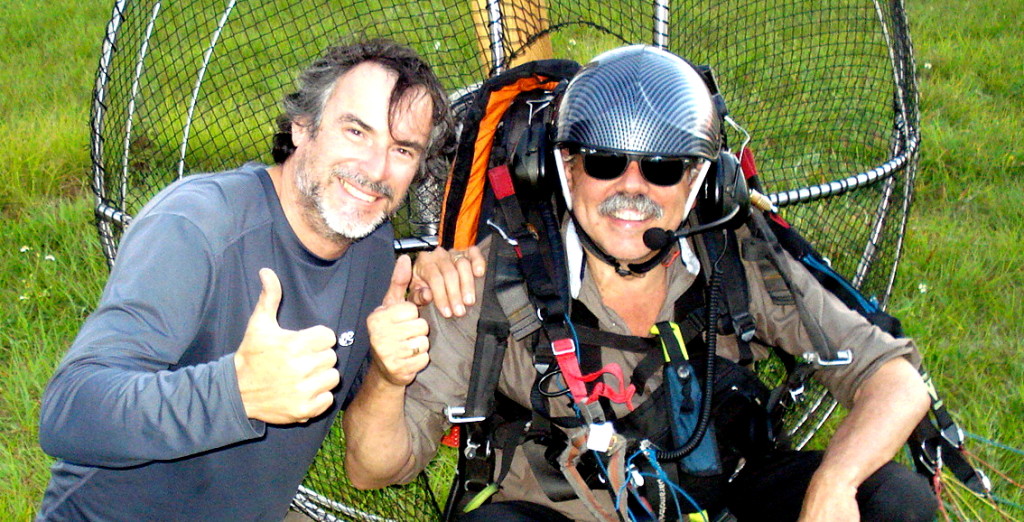 “Ike” Higinio Morinigo-Gill At a Glance: