Professional extreme sportsman Pal Takats is probably the most well-known name in the Paragliding industry. This 28 year old phenomenon was born in Budapest Hungary and his entire life has been dedicated to extreme adrenaline-pumping sports. Throughout his career, he has captivated the world with some of the most extreme, dynamic, and skilled acro flight demonstrations anyone has ever seen. Pal has invented several new Acro maneuvers and much of what he does appears to defy physics. In addition to Paragliding, he has been involved in kite surfing, base jumping, XC flight, climbing, and skiing. Recently, Pal Takats chose to Team up with Mike Robinson of BlackHawk Paramotors USA to get Powered Paragliding equipment capable of withstanding the demands he would put the machine through. Pal was extremely excited to take delivery of his rugged BlackHawk AirMax 220 with Kestrel Cage. In a picture posted on his personal website, Pal stated “The postman just dropped the packages I’ve been so waiting for!” Mike Robinson of BlackHawk Paramotors commented “Pal Takats is an amazing pilot and a great person to have on our team. We have a great relationship and look forward to supporting his interest in Powered Paragliding for years to come.” Pal Takats wasted no time and immediately began flying his new BlackHawk machine. Stay tuned for video footage of him flying his new motor and testimonial about his amazing BlackHawk Paramotor experience! For more information on Pal Takat’s motor of choice, please visit: http://blackhawkparamotor.com/blackhawk-airmax-220-paramotor/ 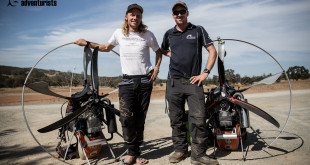